On October 19th, 1991, I woke up and discovered I could no longer walk. (The real story is a little more complicated than that, but I like to maximize the drama when telling other people). My parents, partially convinced this was an elaborate ploy for attention, dutifully took me to the local hospital for testing. Once we arrived, it immediately became obvious that I was either an incredible actor, or this was something far more serious. We spent the next day or so jumping from hospital to hospital, not getting any real answers. Two weeks later, and after more poking, prodding, scanning, and examining than any five-year-old should have to endure, my parents were told something along the lines of “We think she has Transverse Myelitis. No, we can’t really tell you anything about it. No, we don’t think she’ll ever get better.”

Now, I imagine this was tough news for my rather green and inexperienced parents, but it’s also pretty hard for a five-year-old to digest. If the doctors could barely explain what was going on to my mom and dad, there wasn’t a chance anyone was going to be able to break it down for a kid. For months, I went to bed every night thinking that because I had woken up unable to walk, one day the reverse would happen: I would wake up in the morning and find that I had magically regained function. It took a little while for me to realize that this was not the case, and I did not take the news well. In an effort to regain some sort of control in my life, I just decided I was going to stop eating. At seven-years-old, I weighed barely 35 pounds.

My parents decided that something needed to be done, and quickly. They knew I was unhappy, and despite their best efforts, as able-bodied adults there was a level of camaraderie they would never be able to give me. Lots of dedication and searching in a pre-internet era led them to the Variety Club of Philadelphia, a charity benefiting children with special needs that hosted an annual sleep-away camp for kids specifically with physical disabilities. That, combined with the later discovery of wheelchair sports, proved to be absolutely life changing for me. For the first time, I was able to interact with a group of kids my age who could relate to the daily struggles and frustrations I faced. It helped build my confidence and I started to accept the changes that had occurred. 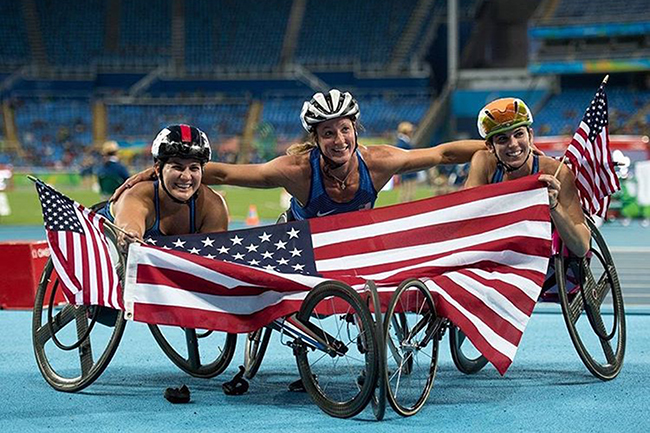 Flash forward a decade or so, I had graduated high school with honors, and accepted an athletics scholarship to the University of Illinois at Urbana-Champaign as a dual sport athlete to play wheelchair basketball and race as a member of track and road racing team. I have since graduated with a BS in Psychology, traveled the world, and won seven Paralympic medals and over 25 marathons. Currently, I’m pursuing a Masters degree from the University of Illinois in Library and Information Science, with a focus on Archival Work. I’m training for one final Paralympic Games in Tokyo 2020 and excited to see where my experience in elite athletics combined with my Information Science degree will take me.