It all started for me back in Seattle in 1999, when I went to the first TMA symposium and met Sandy, Pauline, Dick, Deanne and Debbie. I was a resident in neurology at The Johns Hopkins University about to become a faculty member. I knew I wanted to specialize in something related to the spinal cord, but I was not sure what.

Until this. Then I knew. I met a bunch of passionate, kind, caring people who had TM and who wanted to forge a community to better understand TM and to create a better future. And I wanted to become a part of that.

I didn’t know then that I would form lifelong friendships and would spend 17 years and counting trying to improve the lives of those with TM, NMO, ADEM and ON.

But it has been the most rewarding experience of my life. And we are JUST BEGINNING.

We formed The Johns Hopkins TM Center, we developed criteria for the diagnosis and treatment of TM, we hosted and organized symposia, we advanced the research on stem cells and remyelination, we played with kids and got messy at Victory Junction Gang Camp and at The Center for Courageous Kids, and we trained folks like Dr. Ben Greenberg, Dr. Michael Levy, Dr. Daniel Becker and others. 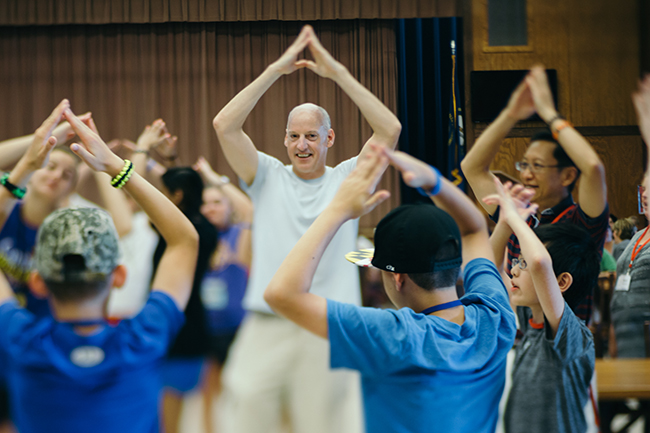 We laughed, we cried, we persevered, we pushed. And it’s all because of the people. The TMA is the greatest community in the world and together, we are so much better than our individual parts.

So, here we go. Onto a chapter where TM and other rare neuro-immune disorders are increasingly recognized and treated early; where risk factors and early warning signs are recognized; where patients get referred quickly to an increasingly broad network of experts; where clinical trials test REPAIR strategies to see if patients can RECOVER.

This chapter, too, won’t be simple and we will need to rely on each other.

Anthropologically speaking, symbols can be emotionally powerful and life-altering in their impact.

I met Dr. Douglas Kerr in 1999 at the first TMA symposium in Seattle. It was a remarkable event in so many ways. Doug spent the weekend offering education, participating in the question and answer discussion and meeting the more than 100 people there who had TM and their family members. He also met the other physicians who attended, including Drs. Chuck Levy and Joanne Lynn who were the first members of our medical advisory board. At the time, Doug was the Chief Resident of Neurology at Johns Hopkins and was in the process of finding his long-term focus for offering clinical care and conducting research. That weekend in Seattle and his experience with our community changed Doug.

Shortly after our symposium, Dr. Kerr announced that he was establishing a Transverse Myelitis Center at Johns Hopkins and that he was going to specialize in TM. I would need so much more space than allowed for this article to characterize the real impact that this announcement had on everyone who had TM at the time, and for everyone who would be diagnosed with TM in the future. And the impact came to include all of those people with ADEM, with NMO and now with AFM. Doug changed our world!

Doug’s decision to specialize in TM was one of the most courageous acts I’ve experienced in my 65 years on the planet.  At that time, almost nothing was understood about TM.  There was almost no research and the only publications about TM were case series analyses.  To be totally honest about my observations, Doug had absolutely no idea whatsoever what he was getting into.  He spent a weekend with 100 people and came away from the event having been impacted by the desperate need he saw in these people, combined with just about everyone’s ignorance about this disorder.  The impact on him was emotionally profound.  His decision was motivated more by his heart than his head; and this is so Doug.

Over the years, Pauline and I have gotten to know Doug very well and count him among our closest friends.  There are few people on the face of the earth who are more passionate than Doug.  He is brilliant, with tremendous creativity.  He possesses the rare blend of being an exceptional scientist with an equal love for the arts, music and literature, i.e., both sides of his brain work in equal measure.  And he wears his heart on his sleeve.  You won’t find many physicians or scientists who care more than Doug.  And he is a realist and a pragmatist.  He knows that to do science or develop a great clinical practice, you also must be able to market your skills, your vision, your dreams, your passions.  No one markets better than Doug.  Doug has been one of the great carnival barkers of all time.  And most importantly, Doug has very real and extraordinary visions, dreams and passions.

When Doug announced his specialization in TM, he was a shining star.  When we got Doug, we got the total package.   Doug put transverse myelitis on the map.  His specializing in TM changed how clinicians and scientists thought about and treated TM.  I can’t overstate the importance of this impact.  By bringing together the most prominent group of scientists and clinicians in neuroimmunology and infectious diseases to develop the diagnostic criteria for TM, Doug created the foundation for a diagnosis of TM, for the ability to design scientific studies, and as importantly, he created the group legitimization of transverse myelitis as a distinct disorder.  This and all his efforts have had and will continue to have a profound impact on everyone in our community, including the physicians and scientists who specialize in the rare neuro-immune disorders.

And his impact has entirely covered the waterfront.  With so little published in the medical literature, Doug learned to offer the highest quality of clinical care by ‘learning on the job.’  He developed the best approaches for acute therapy and for managing symptoms through experience.  Of course, he was informed by all his experiences with people with multiple sclerosis, but he had to determine how TM was different from MS, and how his strategies had to be applied recognizing those differences.  He had no guidebook or map to determine his direction; he had to create it.  And he did.  And every clinician and every patient is benefitting from this work.  You get to be an expert through the process of acquiring experience.  Doug set out the shingle, and people with TM came to him in droves, from across the country and from around the world.  It took a very special person to transform experience into clinical expertise, and that is precisely what Doug accomplished.

Doug is also an academician.   He understood and accepted the obligation to train physicians and scientists in the discipline that he was basically creating – a specialization in rare neuro-immune disorders.  He trained and mentored Dr. Benjamin Greenberg who has gone on to open a TM and NMO Center at UTSW, and he trained and mentored Dr. Michael Levy who became the director of the NMO Center at Johns Hopkins.

As there was very little research on TM before Doug, he came into the discipline with a relative blank slate, and just an enormous hill to climb when it came to need.   From diagnostic criteria, to disease process, to effective acute therapies to symptom management to restorative therapies, Doug was aware of the challenges and set about attempting to make a difference across all of them.  Doug was and is a great collaborator.  The interests of science and the interest of making a difference for the community have taken precedence over personal ambition.  Doug has always been an advocate of sharing scientific work for the benefit of patients; this is not a characteristic universally shared in academia.  Doug not only embodied this higher value, he has encouraged it in his students and colleagues.

In addition to his work as a clinician, as a teacher and as a scientist, Doug has been a tireless advocate for our community and for The Transverse Myelitis Association.  Doug serves on both our Medical and Scientific Council and on our Board of Directors.  Whatever we ask of Doug, he never says no.  He has been a critical player in almost every symposium, he’s missed only one camp in all the years we’ve been offering our camp and education program, he participates in reviewing prospective fellows and research grants, and perhaps, most importantly, he offers such wise and genuinely caring counsel to the board, the officers and the staff of the TMA.

Doug’s work has taken him into the world of research, drug development and the pharmaceutical industry.  He is no less a part of our work, our efforts and our community.  He is a fierce advocate for research in our discipline and always vigilant for any opportunities.  His involvement in the TMA remains as strong and active as in the past, and he remains entirely committed to making a difference for our community.  And Doug is always the biggest kid at camp.

Dr. Douglas A. Kerr has been a godsend for our community.  We have so much respect and appreciation for his intellect, his creativity, his passion, and his care.  And we are so grateful for all that he has given and gives to our community.  You are a mensch, Dr. Kerr, and a wonderful friend.  Pauline and I feel entirely blessed to have this exceptional human being in our lives.