On April 2nd, 2016, I flew home from Jersey after visiting my brother. I was driving back home when I had an intense pain in my right groin. I pulled off the road, got a coffee, and walked back to the car when my hands went into spasm. I thought I was having a stroke and called for help from a passerby. I was really frightened and panic had set in. The kind stranger called paramedics and my son for me. My son, Adam, spent the whole of this dreadful day with me which I am so grateful for. By the time I arrived in A & E (accident and emergency), I was paralyzed from the waist down, and the pain was terrible.  I had a chest X-ray, a CT scan and the first of two MRI scans that day. Originally they thought I had a twisted bowel or ovaries. Diagnosis was to take two days after various tests. The first MRI did not show any lesions, but the second MRI did between T7-T9 revealing Transverse Myelitis. I was passed from department to department whilst they came and told me ‘good news’ it’s not this or that!  In the meantime, I was on morphine for the awful pain and I still couldn’t sit, stand or walk, I can’t say it felt like good news at the time.  After the second MRI, I also had the joy of the lumbar puncture and many students coming to take a look at this rare specimen with Transverse Myelitis – I started to spread the word from the beginning!

I then spent 10 days on the Neuro ward where after intense steroids I met two amazing physios who helped me stand totally supported, but it gave me hope. They taught me to work the messages from somewhere up there in my brain to my right big toe!  I was able to look out of the window at the trees for two or three minutes a day; a miracle in itself. Until taken away from you, those small things mean so much, the first shower after a week, the first hair wash, all in a wheelchair of course but hope did begin. 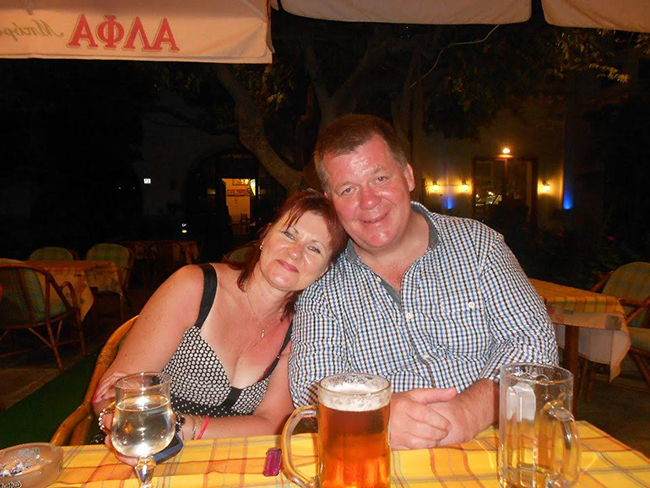 There began my journey to learn to sit, stand, walk again. It was hard work, emotional often, uncomfortable, painful always, but with the amazing team at rehabilitation unit at Nottingham City Hospital, Linden Lodge rehab, my family and friends who supported and loved me daily.  Along with the most amazing patient colleagues who I met in the unit as we went through our various treatment passages, we shared the ups the downs, the dark humour and the tears and joys when we made progress together.  I was able to leave the unit after ten weeks. After a further three months at home, I am now back at work full-time, I run my home, do the garden, have been abroad on holiday, spend time with family and friends. I exercise every day. I am sometimes in pain but mostly I try to call it discomfort. The band sensations are the worst but I am resisting medication in the hope that the messages from my brain keep getting through and continue overtime to normalize.

I try to carry out my way of life as closely as I can to how it was before April 2nd this year. Though not always easy, I have found myself to be stronger and more courageous than I would have imagined. I am hopeful that by spreading the word others might be diagnosed sooner and not suffer the frightening uncertainty I went through. Love to all fellow TM champions.