Three weeks after my first baby was born, I started to get a blinding headache that would not subside from anything that I did. I suffer from chronic migraines so I thought maybe as I was so exhausted with the baby and that it would go away. After a week with no relief, I started to also have constant watery eyes and sinus problems. Within two days, I began to have trouble urinating and could only urinate 10-20 ml or nothing at all. I saw my physician and he noted that I had 1.2 L of urine in my bladder! I was in so much pain but they said it was a UTI and admitted me in hospital to have IV antibiotics. I was catheterized as I couldn’t void by myself at all now. Not even 24 hours had passed and I started to lose vision in both eyes, lost most muscle strength in my legs, had two falls, had tingling and numbness in all my limbs and could barely walk. Even through these symptoms, a physician attending said to me that it “was just exhaustion and the UTI” so I was sent home after just three days.

I was at home bed-ridden for the next two days. My husband had had enough after I had another fall in the bathroom and almost knocked myself unconscious. I was now almost completely unable to walk at all. We went to our local hospital and I was examined by the most extraordinary number of consultants! I was now almost completely paralyzed from the chest down and unable to even roll in bed without assistance; and my eyesight in my left eye had gone to only 11% vision. It took two MRI’s, a lumbar puncture and lots of pathology tests to give me the diagnosis of Idiopathic Transverse Myelitis and Optic Neuritis. 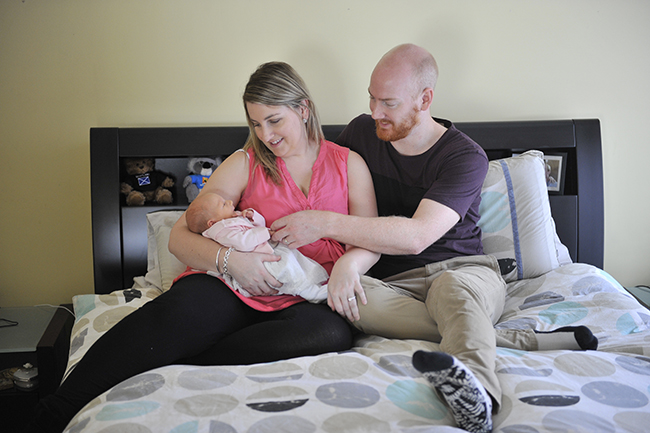 After three weeks in hospital, I completed one week in rehab learning to walk and scheduled toileting. I had lost a lot of sensation from my waist down and this unfortunately has never recovered. It took twelve long weeks and three trials of voids before I had my catheter taken out permanently.

The most difficult part of this condition is that from the outside looking at me, most people think I look perfectly fine and that there is absolutely nothing wrong with me and yet they can’t understand some of the simplest struggles we go through day to day. I didn’t get the perfect first-time Mum period that all others do; transverse myelitis robbed me from that for almost the whole first year of my daughter’s life. But I’m hopeful that with all of us suffering from these rare conditions that we can come together and raise so much awareness that we don’t have to feel like we are on our own.